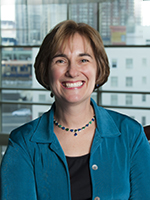 Born in Frankfurt, Germany, Elizabeth R. Schiltz graduated magna cum laude from Yale University and received her juris doctor from Columbia Law School, where she served on the Columbia Law Review. After law school, she spent a year in Germany as a Robert Bosch Foundation Fellow. Schiltz was in private practice for nine years with law firms in Washington, D.C. (Morrison & Foerster) and Minneapolis, Minn. (Oppenheimer Wolff & Donnelly and Faegre & Benson), focusing on banking regulation, general corporate law and international law. Most recently, she practiced banking law at Faegre & Benson, Minnesota 's second largest law firm, where, among many other things, she assisted Dayton Hudson Corporation, Fingerhut Companies, Carson Pirie Scott, and other major retailers in obtaining charters for their credit card banks.

Schiltz was a member of the faculty of Notre Dame Law School from 1996 through 2000. She teaches classes in contracts, commercial law, and banking regulation. Her research interests include the relationship of federal and state law in regulating consumer credit, disability and consumer law theory, and feminist legal theory.  Schiltz received the 2007 Dean's Award for Outstanding Scholarship and was elected Professor of the Year by the graduating class of 2007. In 2014, she was recognized with the Good Sister Award by St. Thomas' University Advocates for Women and Equity.

Schiltz is co-director of the Terrence J. Murphy Institute for Catholic Thought, Law and Public Policy and serves on the Board of Directors of the National Catholic Partnership on Disability. She is also a contributor to the Catholic legal theory blog Mirror of Justice. Schiltz is a 1998 graduate of the Partners in Policymaking Academy, a nationwide, state-based training program in disability advocacy.

Voting Rights for Persons with Cognitive Disabilities, (invited contribution to symposium on The ADA at 25:  The Continued Inequality of Americans with Disabilities,  U of St. Thomas L. J. (forthcoming 2016)

The Paradox of the Global and the Local in the Financial Crisis of 2008: Applying the Lessons of Caritas in Veritate to the Regulation of Consumer Credit in the United States and the European Union, 26 J. OF LAW & RELIGION 173 (2010) (peer-reviewed journal; invited contribution to symposium on The Global Economic Crisis, Law and the Religious Traditions)