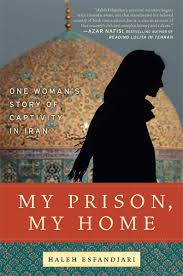 This month we are hosting two book club discussions on Haleh's book, My Prison, My Home. The discussions offer more opportunity for readers to attend one or the other and both will be facilitated in the Luann Dummer Center for Women from noon-1 PM.

Feel free to bring your lunch and/or beverage to the discussion.

Free and open to the public

A stunning arrest was the culmination of a chain of events set into motion in the early-morning hours of December 31, 2006—a day that began like any other but presaged the end of Esfandiari's regular visits to her elderly mother in Iran, and her return to the United States. Esfandiari became the victim of the far-fetched belief on the part of Iran's Intelligence Ministry that she, a scholar with the Woodrow Wilson International Center in Washington, D.C., was part of an American conspiracy for "regime change" in Iran. In haunting prose and vivid detail, Esfandiari recounts how the Intelligence Ministry subsequently ordered a search of her mother's apartment; put her through hours, then weeks, of interrogation; tapped her phone calls, forcing her to speak in code to her husband and mother; and finally detained her at the notorious Evin Prison, where she would spend 105 days in solitary confinement. Through her ordeal, Esfandiari came face-to-face with the state of affairs between Iran and the United States—and witnessed firsthand how fear and paranoia could create a government that would take her captive. Weaving her personal story of capture and release with her extensive knowledge of Iran, My Prison, My Home is at once a mesmerizing story of survival and a clear-eyed portrait of Iran today and how it came to be.

Dr. Haleh Esfandiari will be coming to St. Thomas on Thursday March 6th 2014 from 7:30 - 9 to discuss her book and "The Women's Movement in Iran and the Middle East".  As a longtime expert on Iranian politics and a prominent scholar and public intellectual, Dr. Esfandiari is an outspoken advocate for human rights and women's rights. She will interweave her personal experiences with a political history of Modern Iran and the Islamic Middle East. She will also address the current and changing situations of the region from an international feminist perspective. Please visit the home page to view full details on Haleh's visit!