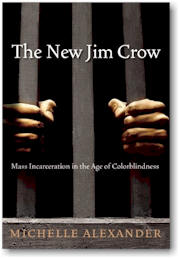 Free and Open to the Public.

The New Jim Crow exposes a newly emerging caste-like system in the United States, one that has resulted in millions of African Americans locked behind bars and then relegated to a permanent second-class status. They are denied the very rights supposedly won in the Civil Rights Movement. Since its publication in 2010, the book has been dubbed the “secular bible of a new social movement” by numerous commentators, and has led to consciousness-raising efforts in universities, churches, community centers, re-entry center’s and prisons nationwide.